Dear friends, we are happy to announce today 9 of August 2014 the foundation of the first Peliti local group outside Greece in our neighbor country Bulgaria.

Coordinator of the group is Zdravka Hristova. Zdravka’s first acquaintance with Peliti was in 2012 as a volunteer. From that time a close friendship between us was established.

Since 2013 we have been discussing the founding of a group in Bulgaria. The right moment came and was taken the decision to found a group in Bulgaria which is the first group in foreign country, opening a new page in history of Peliti.
We wish good start to Zdravka and the other friends in Bulgaria in this big journey that starts.
We’ll be next to you in this journey at hard and good moments that could happen. The group is founded in an important moment in Bulgaria where the agricultural biodiversity is under pressure. Bulgaria is also one of the richest agricultural countries. Because of the economical crisis many farmers are still cultivating traditional varieties. The group would play an important role, having in mind that there are no organizations in the country with main purpose the conservation of traditional varieties.

Since 2012 when Zdravka has first came in the 12 Pan-Hellenic Seed Exchange Festival, many other Bulgarians have visited the festival and were inspired from it.

Last year was organized the first seed exchange event in Bulgaria from the Green Team Bulgaria inspired from the Peliti festival.
Wishing a good start!

On behalf of Peliti
Panagiotis Sainatoudis

A few words about Zdravka
Zdravka was born in 1978 in Sofia, Bulgaria. She studied Greek philology in Sofia University and works as a translator and teacher of Greek language. She is involved in ecological issues in Bulgaria and is a member of “Green Team Bulgaria”. 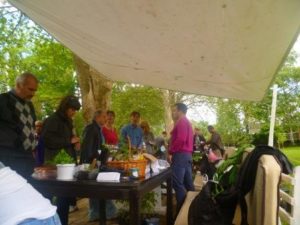